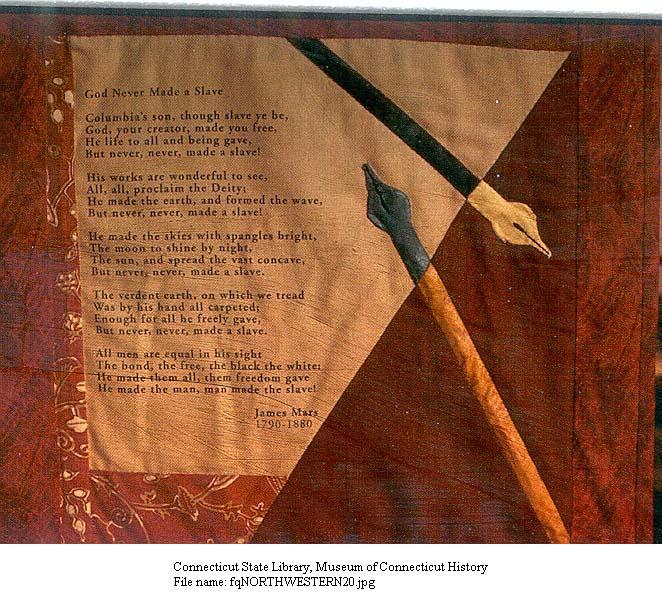 James Mars was born into slavery in Connecticut in 1790 and became free through the gradual emancipation law enacted by the state in 1784. Mars wrote a pamphlet about his experiences, Life of James Mars, a Slave Born and Sold in Connecticut, which can be found in the book Five Black Lives. Mars was freed at the age of 21 and spent much of his life in Hartford and Norfolk, Connecticut. Always active in the church, he became a deacon of Talcott Street Congregational Church in Hartford. Mars helped organize meetings to promote freedom for slaves and to improve conditions for free African Americans. In 1842, he petitioned the Connecticut General Assembly in an effort to gain the right to vote, which was denied African Americans in the state's constitution. Mars lived his later years in Norfolk and supplied information on the history of that town which appeared in the 1900 publication History of Norfolk, written 20 years after his death. Mars is buried alongside his father, Jupiter Mars, who served in the American Revolution. Nearby are graves of the Freedom family, who are also mentioned in the above town history. These stones are located to the rear and left of the first entrance into the cemetery. To the right of this entrance, and near the wall next to Old Colony Road, is the grave of Alanon Freemen, who served in the all-black Connecticut Twenty-Ninth Regiment in the Civil War. The quilt square incorporates a poem written by James Mars, "God Never Made a Slave":