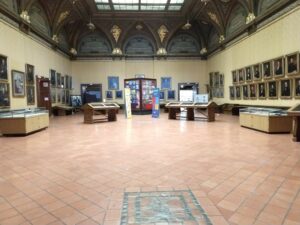 The focus of the Museum and its collections is Connecticut’s government, military and industrial history. Permanent and changing exhibits trace the growth of the State and its role in the development of the nation from the Colonial era to the present.

The Museum consists of Memorial Hall and three adjoining exhibit areas. On permanent display are portraits of Connecticut Governors as well as historic documents, including the State’s original 1662 Royal Charter, and the 1818 and 1964 State Constitutions. The 1639 Fundamental Orders have returned and are also on display at the Museum.

History of the Museum: The Museum of Connecticut History has been collecting and displaying objects related to Connecticut’s political, industrial and military history since 1910.

Click on an exhibit to learn more or download our brochure [in PDF format – requires Adobe Acrobat Reader].

About the Museum & State Library Building:

The museum is located in the historic and magnificently restored 1910 State Library and Supreme Court building across the street from Connecticut’s State Capitol building in Hartford.