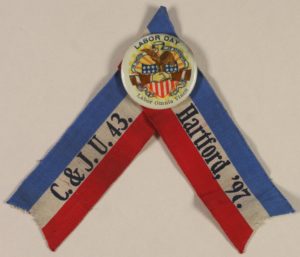 On March 20th, 1889 the Connecticut General Assembly passed “An Act establishing a Legal Holiday.”  Consisting of one sentence, the Act read:  “The first Monday of September in each year shall be a legal holiday in this state, to be known and designated as labor day.”   Connecticut thus joined a growing number of states that had legalized a day set aside to celebrate the American worker.

Labor Day had first been celebrated in New York City in 1882 and the idea gradually  spread across the country.  Several municipal ordinances in Oregon, passed in 1885 and 1886, led to that state becoming the first to declare Labor Day a legal holiday in 1887.  Massachusetts, New Jersey and New York followed suit in that year, with Connecticut, Nebraska and Pennsylvania legalizing the holiday in 1889 and 1890.  By 1894, 23 states had done so and, on June 28th of that year, the U.S. Congress declared Labor Day a national holiday.

The impetus behind Connecticut’s legalization of Labor Day came from Adolphus Fredrick Hunie (1844-1907), a State Representative from New Haven who, in February 1889, introduced the bill that later became law in March.  Hunie, a Democrat, was born in Switzerland and emigrated to America and New Haven with his family in 1849.  He enlisted in the 15th Regiment Connecticut Volunteers and served during the Civil War.  He had been an apprentice pattern maker before the war and, by 1870 was a wheel maker with the New Haven Wheel Co.  His obituary in the New Haven Morning Courier of Dec. 20, 1907 stated that “he identified himself with the labor element and became one of the leaders in that great struggle and this finally took him into political fields.”  He was elected to the House of Representatives in 1888 and returned in 1889, with the support of New Haven’s working class.

After decades of spotty attempts to organize and resist anti-worker legislation and judicial decisions, workers in Connecticut had begun to exert influence during the 1880s, notably in the heavily industrialized areas.  Between 1881and 1886 there were 238 labor strikes in Connecticut, involving more than 9,000 workers.  Most strikes involved wages and hours, and the nation-wide movement for an 8-hour day found many sympathizers in Connecticut.

The Knights of Labor had emerged as the most prominent labor organization in the country in the 1870s and, by July 1886, Connecticut had nearly 12,000 members in 118 local assemblies, the majority being women textile workers in the textile mills in eastern Connecticut.  The Connecticut General Assembly had 37 Knights of Labor among the members of the 1885-86 legislative session.

But 1886 would prove to be the high point of Knights of Labor activity in Connecticut.  The national organization was tainted by its alleged involvement in the famous Haymarket Riot in Chicago on May 4th.  In Connecticut, the local assemblies’ reluctance to endorse members’ strikes at the Derby Silver Co., the Southington Cutlery Co. and the P.& F. Corbin Co. in New Britain, and their insistence that negotiation with adamantly anti-union owners should be the union’s only course of action, led to the Knights’ a decline in membership from 12,000 to 5,622.

The formation of the American Federation of Labor in December 1886 and its affiliate Connecticut Federation of Labor in March 1887, marked the next phase of labor organizing in the state.  The Connecticut Federation was composed of the Central Labor Unions of  Hartford, Meriden, Danbury and New Haven, and unions representing carpenters, clerks, wood carvers, paper and wooden box makers, iron moulders, horseshoers, bricklayers, masons’ tenders, hod carriers, hatters, bakers, tailors, barbers, printers and cigarmakers.  William E. Cree, of the Hartford Central Labor Union, in a speech to the organizing convention in Hartford in March 1887, stressed the need for a “combined organization for mutual protection and benefit,” which would “continue to organize, educate and bring about results” including, most importantly, “a reduction of the hours of labor.”

Against this background of labor organizing for better and safer working conditions, better wages and shorter hours, and the resulting push-back by company owners, the Connecticut legislature legalized the Labor Day holiday in 1889.  Under the headline “A LEGAL HOLIDAY” the Hartford Courant  noted on August 27th that “For the first time, the day which labor organizations a few years ago set aside as a general holiday will be a legal holiday in this state….In celebration…the trades unions in this city are making preparations for a big parade and picnic next Monday.”

Led by Colt’s Armory Band, the first Labor Day parade consisted of delegations from the city’s Central Labor Union and six of the city’s unions:  cigar makers, typographical workers, carpenters and joiners, tailors, the Brotherhood of painters and decorators and the brewers.  They marched from Bushnell Park through the streets to the South Green, where they boarded horse-drawn trolley cars bound for Union Grove on Wethersfield Avenue.  There they listened to a long speech on the necessity of the 8-hour day by Edward King, a famous labor organizer from New York City.  With the speech over, the pavilion at the grove was given over to dancing, which lasted well into the night.

New Britain’s celebration consisted of a parade of the city’s joiners, moulders, bakers and masons through the city to Rentschler’s Park, where the joiners and masons played a baseball game, with other sports and dancing also available.  The Courant reported that two banners were prominently displayed, one reading “A Hearty Welcome to all Business Men and Friends of Union Labor” and the other bearing the Knights of Labor’s motto:  “An Injury to One  is the Concern of All.”  Knights of Labor from Winsted, Torrington, Canaan, New Hartford, Thomaston and Norfolk celebrated Labor Day at Highland Lake in Winsted, and celebrations were also held in New Haven and Bridgeport.

Such Labor Day celebrations, consisting of parades, speeches, athletic events and picnics, continued well into the 20th century.  But, fueled by a steady decline in union membership nationally and the erosion of public support for workers’ rights and concerns surrounding wages and workplace safety, for most Americans Labor Day now appears to be largely devoted to taking advantage of Labor Day sales or enjoying the last cook-out of summer.

Foucher, M.S., The Labor Movement in Connecticut:  An Introductory History.  A typescript written in 1969, it covers the movement from 1800 to the 1950s.

Included in this brief history are accounts of other Connecticut Labor Day’s past from not only the Hartford Courant, but also from Waterbury Evening Democrat, the Daily Morning Journal and Courier, the Norwalk Gazette, the Norwich Bulletin, and Bridgeport Evening Farmer.

The ribbons and badges worn by union members on Labor Day illustrated above are in the collection of the Museum of Connecticut History.