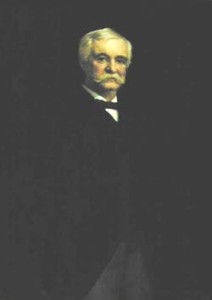 Morgan Gardner Bulkeley was born on December 26, 1837 in East Haddam, Connecticut, the son of Eliphalet Adams Bulkeley and his wife, Lydia Smith (Morgan) Bulkeley. His ancestors were early settlers of Massachusetts and included several prominent people. His father was a lawyer, a state legislator, organizer of the Republican Party in Connecticut, and president and organizer of the Connecticut Mutual and Aetna Life Insurance Companies.

Bulkeley attended Hartford Public High School. When he was fourteen years old, he began working at the Aetna Life Insurance Company, which his father had organized. However, he soon left Hartford to work as a salesman for his uncle at H.P. Morgan & Company in Brooklyn, New York and was later made a partner in this company. When the Civil War began, Bulkeley enlisted with the Thirteenth New York Volunteers. At the war’s end, he returned to the Morgan Company, where he worked until his father died in 1872. At that point he moved back to Hartford, where he organized and was president of the United States Bank. In 1879 he became president of Aetna, a position he held until his death in 1922.

He married Fannie Briggs Houghton on February 11, 1885 in San Francisco, California. They had three children, two sons and a daughter. Fannie was a state chairman for the Liberty Loan Drive during World War I. She died on June 22, 1938.

Bulkeley’s political rise began when he was elected to the Hartford Common Council in 1875. In 1876, he became a member of the Board of Aldermen, and from 1880-1888, he was mayor of Hartford. In 1880, he was an unsuccessful candidate for the governorship but ran for governor again in 1888 and, in an unusual election, won. His Democratic opponent, Luzon B. Morris, had over 75,000 votes, and Bulkeley had over 73,000 votes, but there were almost 5,000 votes for Progressive and Labor Party candidates. Because neither Bulkeley nor Morris had received at least fifty percent of the vote, as was then required to be elected Governor, the legislature (mainly Republican) had to decide the outcome. The choice was Bulkeley.

In 1890, Bulkeley sought the Republican Party’s nomination for an election in which where he would again face Morris. However, the party had an unwritten policy of limiting Republican governors to one term and instead chose Samuel Merwin as their candidate. The 1890 election featured a new “secret ballot” law aimed at reducing voter intimidation and fraud. Unfortunately, it also produced confusion over the legality of some of the votes cast. With the lower house of the General Assembly controlled by the Republicans and the upper house by the Democrats, neither Morris nor Merwin was a clear winner.

Because of the standstill in the Legislature and its failure to select a new governor, Bulkeley refused to relinquish the Governor’s office to either Morris or Merwin, and continued there for two more years, even though he had neither been a candidate nor elected. The legislature failed to pass any acts or provide funding for the government, and Bulkeley had to borrow money from Aetna to pay the state’s bills. At one point the governor of New York refused to recognize a request from Bulkeley, until the Connecticut Supreme Court ruled that Bulkeley was indeed governor of Connecticut. Connecticut’s courts also ordered that Aetna be reimbursed. In 1901, a law was passed by the General Assembly that made the candidate who received the most votes in an election the winner, even if their total was less than fifty percent.

After leaving office Bulkeley concentrated on his business interests, but from 1905 through1911 he served in the U.S. Senate. He also served on various local committees, including the one that oversaw construction of the State Library and Supreme Court Building in 1910. One of the lesser-know aspects about Bulkeley is that he was founder of the Hartford Dark Blues, one of the original teams of the National League of Base Ball Clubs, and in 1876 was elected as the first president of the League. He only served for one year, but it was enough to have him elected to the Baseball Hall of Fame at Cooperstown, New York.

Morgan Bulkeley is honored in several ways in Hartford. The home office of Aetna includes him in one of its murals. The city named a street and a high school for him. Bulkley Bridge carries Route 84 between Hartford and East Hartford. Bulkeley’s house was located on Washington Street; after his death it was purchased and used by the Connecticut State Police. In 1937, it was torn down and replaced by a new State Police building.

Portrait
Charles N. Flagg painted the portrait of Governor Bulkeley about 1889. It is 49″ x 63″ in its frame.