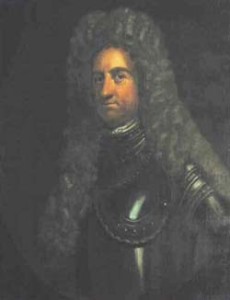 John Winthrop III, given the old Anglo-French patronymic (personal name) “Fitz” (“son of”) to help distinguish him from his father, was probably born at what is now Ipswich, Massachusetts, March 14, 1637/38, the son of John Winthrop, Junior and his second wife, Elizabeth (Reade) Winthrop. However, his birth is recorded in Boston. Ipswich, then known as Agawam, had just been established in the Massachusetts wilderness in 1633.

Fitz-John, along with several sisters and a brother, Wait Still, were born into an illustrious family. Their grandfather, John Winthrop, Senior, was the first governor of Massachusetts; their talented and well-known father, John Winthrop, Junior was a physician, served in the Connecticut General Assembly, and was himself Governor of the Colony of Connecticut for eighteen years (1657, 1659-1576). John Winthrop, Junior, was a successful man, and his support and advice were in great demand. He was frequently away from home, sometimes for long periods of time. His changes in career and projects caused the family to move several times in Fitz-John’s early years, from Ipswich to Boston to New London. By the fall of 1646, when Fitz-John was about eight, the family had settled at Winthrop’s Neck on the Thames River in the New London area.

With all the moving and with the father’s absences, the boys’ education was somewhat neglected. The house at Winthrop’s Neck was the center of several farms owned by their father. Emphasis was not on studies but on the farms, and Fitz-John liked being outdoors, a preference that was to remain with him throughout his life. It was 1653 before he, at age sixteen, was sent with Wait Still to Fitch’s School for Boys in Hartford for a year and a half. He was an average student. Then, the boys were sent to Cambridge, Massachusetts, where Wait Still entered a private boys’ school while Fitz-John took the examinations for Harvard. Fitz-John did not pass, his lack of education hindering him. A cousin who was a scholar was hired to tutor him for a year, but the cousin became ill and died.

Fitz-John stayed on in Boston with relatives. He had not been especially interested in attending Harvard and had applied mainly to please his father. Preferring action and the outdoors, in 1658 when loyalists in England needed soldiers to help the King retake his throne from Cromwell, Fitz-John jumped at the opportunity. Through family connections he became a lieutenant in Richard Cromwell’s Army, eventually rising to the rank of captain. The army moved down from southern Scotland to London and helped restore King Charles II to the throne in 1660. Fitz-John’s unit was disbanded, but he remained in England visiting other relatives.

Fitz-John was still there when his father came to London in 1661 to obtain a charter for Connecticut. In April 1663, both returned to New London, and Fitz-John became involved in the political life of the colony. He served as a judge and in October of 1664 was one of the Connecticut boundary commissioners, resolving conflicting land claims along the New York-Connecticut border. One result of the commission’s work was that Long Island, formerly part of Connecticut, was assigned to New York.

Fitz-John continued to take part in the Connecticut’s government, being elected as one of New London’s representatives to the General Court of the Colony of Connecticut in 1671. He served well in the legislature but preferred military campaigns to creating laws. In 1672, he was made head of the New London County Militia. In 1673, he was made Sergeant-Major of Long-Island and helped drive the Dutch from that area.

Scholars say that of the two sons of John Winthrop, Junior, Wait Still was most like his father. Fitz-John had many of his father’s qualities, but was more of an outdoorsman, a soldier, and his own man. He lived at a time when church and government were not separated, and there was close monitoring of public and private morals. Yet, as the son of a wealthy and influential family, he could flout convention in ways that normally invited serious punishment by church or government authorities. That is perhaps why he was not officially punished when about 1677 he entered into a common-law marriage with Elizabeth Tongue, fifteen years his junior, and the daughter of wealthy New London innkeepers, George and Margery Tongue. The couple had one daughter, Mary. Elizabeth, who signed deeds and letters as late as 1698 as Elizabeth Tongue, died April 25, 1731.

Although people generally saw Fitz-John as someone with a buoyant personality and with much common sense, he was slightly self-indulgent and could hold a grudge against those opposing him. The latter attitude created problems for him in his many business enterprises. He also had a health problem, being plagued all his life by an unknown illness for which he took an all-purpose remedy created by his father, who was a physician.

King Charles II of England, restored to the throne, wanted to centralize New England under one governor, doing away with separate governors for each colony. By 1686, he had created the Dominion of New England with one governor, Sir Edmund Andros, at its head in Boston. Andros governed with a council of 27 members from the various colonies. The only Council member from Connecticut was Fitz-John Winthrop, a great supporter of the King’s plan and a friend of Andros.

The Dominion of New England government was not popular. However, when it was overthrown in 1689, Fitz-John was in New London and his participation in the Dominion government did not seem to affect his overall popularity; he was elected as an Assistant to the next General Court in 1690. His individuality showed itself once again in this post, as he did not attend any of the meetings, which were held in Hartford. At the next election, he was not reelected. However, he continued to serve the Colony of Connecticut by commanding its troops on an invasion of Canada. Going north along the Hudson River, this expedition consisted of men from New York, Connecticut, and Massachusetts, and was meant to end the French-supported Indian raids to those colonies. The troops only received limited food and transportation, and the expedition was forced to retreat. Governor Leisler of New York, jealous of Winthrop, used the retreat to accuse him of treason. Leisler imprisoned Fitz-John and held him for court-martial at Albany. There, a large group of friendly Mohawks freed him. Fitz-John returned to Connecticut, cleared his name, and received the thanks of the General Assembly. The next spring, a new royal governor came to New York and tried, convicted, and executed Leisler for treason.

While the 1690 expedition to Canada was in progress, another political crisis was brewing. The settlement of Connecticut had begun without a charter from the Crown. New York and Massachusetts, both chartered from the beginning, often tried to infringe on its territory. Although it had been hoped that the Charter of 1662, obtained by Fitz-John’s father, John Winthrop Junior, would prevent Connecticut from being taken over by Massachusetts or New York, those colonies did not give up their claims to Connecticut’s lands. Arguing that the creation of the centralized government of the Dominion of New England had invalidated Connecticut’s Charter, Massachusetts and New York attempted to annex Connecticut’s territory.

Massachusetts and New York officials had friends at Court, and in August 1692, the new governor of New York, Benjamin Fletcher, arrived with power to command the military forces of both New York and Connecticut. Robert Treat was then governor of Connecticut, and he refused to surrender command of Connecticut’s troops. Treat and the Connecticut General Assembly called on Fitz-John Winthrop’s diplomatic abilities and connections at Court. He was to go to England and appeal the validity of Connecticut’s 1662 Charter to King William and Queen Mary. Winthrop left for England late in 1693 and made his case early in 1694. A report prepared by the royal attorney and solicitor-general and ratified by the King and Queen confirmed the validity of the 1662 Charter of the Colony of Connecticut. Connecticut could continue to govern itself.

Fitz-John remained in England for three more years. When he returned to Connecticut, he was awarded five hundred pounds by a grateful General Assembly. He was elected as Governor in 1698, and was reelected annually until his death in 1707.

Although his common-law marriage and health problems somewhat affected his ability to govern, in the end Fitz-John accomplished much as governor. The 1662 Charter was threatened three times during his ten years in office, but each time Winthrop and the Assembly successfully defended it. Winthrop initiated a series of efforts to reorganize Connecticut’s political and judicial structure. In 1698, the Assembly broadened the governor’s authority to act between legislative sessions, and in 1699 the Assembly was divided into two chambers. The twelve Assistants to the General Court became one chamber, the Upper House, and the elected Deputies from the towns another chamber, the Lower House. Opponents at first criticized this change as no one was sure which House had authority over which issues. But adjustments were made, and these two Houses became Connecticut’s first steps towards its modern legislature with a Senate and House of Representatives.

Winthrop considered retiring from the governorship in 1702 after neighboring governors charged him with not supplying enough soldiers for a war against France. The Connecticut voters refused to let him leave office, and he stayed. While on a trip to Boston to see his brother Wait Still remarry and to attend the wedding of Wait Still’s son, Fitz-John became ill. He died on November 27, 1711 and was buried next to his father and grandfather in the King’s Chapel Burying Ground in Boston, Massachusetts.

Portrait
This portrait of Fitz-John Winthrop in long, curly wig and armor of the era was painted by an unknown artist. The portrait is 38″ x 45″ in its frame.