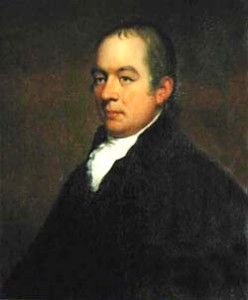 John Treadwell, the only son of Ephraim and Mary (Porter) Treadwell, was born in Farmington, Connecticut on November 23, 1745. Ephraim and Mary were married in Farmington on April 30, 1741. Ephraim was commissioned as a Captain in the Farmington militia and served during the French and Indian War.  The Treadwells attended the Farmington First Congregational Church and instilled in their son John a strong devotion to religion. He is often considered to be the last Puritan governor of Connecticut.

In 1740, Ephraim had purchased “certain pieces or parcels of land and several buildings”1 in the Poke Brook section of Farmington. There the Treadwell family lived in a small red house that is described as having had “the distinctive seventeenth century features of three end windows in a row, the windows close under the eaves, and a long sloping roof.” 2 It was in this house where John Treadwell was born.

John Treadwell attended the local village school. When he was sixteen, his father gave him a week to decide whether or not to attend college. John chose to receive an education, and he prepared for college under the instruction of the Reverend Timothy Pitkin, a son of former governor William Pitkin. As a young man, John Treadwell attended Yale College. After graduating in 1767, he studied law with Judge Titus Hosmer in Middletown but decided not to pursue a career in the field. Instead, he chose to work on his family’s farm and to teach in local schools.

John Treadwell’s service to the colony of Connecticut began in 1776, when the town of Farmington elected him to serve as the town’s representative in the General Assembly. The Revolutionary War had just begun, though relations between Great Britain and the American colonies had been deteriorating for several years. Treadwell was an ardent patriot. In 1774 and 1775, he had been a member of Farmington’s Committee of Inspection and Correspondence.

The town of Farmington re-elected Treadwell to serve as Representative each year until 1785, when he was elected to the Governor’s Council of Assistants. In addition to this post, in 1777, Treadwell was appointed a Justice of the Peace for Hartford County.

In 1784, Treadwell was appointed Judge of the Farmington Probate Court. Treadwell took his responsibilities to heart and saw the appointment as a way to promote justice and humanity. He enjoyed this position immensely, as he was able to directly help widows, orphans, and the less fortunate in society through handling wills and estates, and served for twenty-six years.

When the Treaty of Paris was signed in September 1783, ending the Revolutionary War, Connecticut citizens rejoiced. The country was free of British rule and had to come to terms with how to best govern the new republic. In 1785 and 1787, Treadwell was elected a delegate to represent Connecticut in Congress to help decide these issues, but he did not attend the sessions. In January of 1788, he was a member of the state convention that met in Hartford and ratified the United States Constitution.

Treadwell was a strong believer in education and supported the Connecticut School Fund. The foundation for a school fund was laid in 1733 when the General Court passed an act allowing for the proceeds from the sale of seven townships within the western part (present day Litchfield County) of the Connecticut Colony to be used for education. The interest from the proceeds was to be applied to the support of common schools in Connecticut. It was not until 1737, however, that the townships were authorized to be sold at public auction. In 1765, similar funds were generated from interest on taxes for certain goods. In 1795, the Connecticut School Fund received major support in the form of revenue from the sale of land in the northeastern part of Ohio. Treadwell negotiated the sale for $1,200,000, and supported the issue of the School Fund in the General Assembly. He was appointed one of the members on the Board of Managers to administer the Fund and is known as the ‘father of common school education.’

Treadwell’s interest in education also led him to become a founder of the Connecticut Academy of Arts and Sciences, which was incorporated in 1799. The following year, the Academy began an ambitious project, the end result of which was to be a compilation of statistical and historical facts for each town in Connecticut. A letter and an accompanying questionnaire were sent to a representative citizen in each town, asking that the survey be filled in and returned to the Academy. For the town of Farmington, the letter was sent to John Treadwell. He, with help from others, completed the account. However, interest in the project waned, and nothing came of the accounts for over 200 years. In 2003, the Connecticut Academy of Arts and Sciences did finally publish many of the accounts in the book Voicesof the New Republic: What They Said, Vol. I. The account Treadwell and others prepared for Farmington is included.

Treadwell was appointed a Judge of the Hartford County County Court in 1795. He served as Judge until 1798, the year he was elected Deputy Governor.

1798 also saw the formation of the Missionary Society of Connecticut, the oldest such society in the country. Treadwell’s strong religious beliefs led him to become actively involved in the formation of the Society, and he served as its President from 1798 until 1822. During this time, the northern portions of Vermont and New Hampshire, as well as all of western New York, were considered new settlements, and many of the new settlers came from Connecticut. Missionaries from the Congregational Church were sent to their communities “to promote Christian Knowledge,” 3 and convert those not of the same faith.

In addition to their religious message, the missionaries were also seen as a way to bring New England values and ‘steady habits’ to the new settlements. This view was supported by the Federalist Party, of which John Treadwell was a member. The Federalists believed in a strong central government and looked to preserve traditional ways. Members of the opposing party, the Jeffersonian Republicans, were against the idea of a strong central government. They felt that the new government served the interests of the wealthy rather than the common man. The Republicans also disapproved of the missionaries. They felt that they were pushing Federalist politics with religion. As a result, the rift between the two political parties steadily grew.

On August 7, 1809, the popular governor, John Trumbull, Jr. died. Treadwell, who was serving as Deputy Governor, was selected by the General Assembly to replace him. He was elected in his own right the following year, receiving 10,265 votes to 7,185 for the Republican candidate, Asa Spaulding.

During Treadwell’s term as governor, the United States moved closer to war with Great Britain. The thought of war was unpopular in Federalist Connecticut, a state whose shipping industry depended heavily on foreign trade. A strong cultural bond also existed between Connecticut and the former mother country. When the United States government enacted laws to restrict trade with foreign countries, the Connecticut General Assembly passed resolutions denouncing them. Treadwell, and many others in Connecticut, were dismayed when war was officially declared against Great Britain in June of 1812.

In the 1811 Connecticut elections, Treadwell was defeated by Roger Griswold. It was the first defeat of an incumbent governor since 1786, when Roger Griswold’s father, Matthew Griswold, was defeated by Samuel Huntington. Roger Griswold was also a Federalist, but he received the support of the Republican Party after their candidate, Asa Spaulding, declined the nomination. Part of Treadwell’s problems came from a perception that he was too religious and applied his faith to his official duties. While this was not a concern for governors in an earlier era, it was by the 1800s.

Despite his defeat, Treadwell was still honored by the General Assembly “for his many eminent services rendered this State in the various important offices he has sustained, more especially while Governor of this State.”4 Treadwell returned to private life in Farmington, although not for long. The town elected him to again serve as Representative in 1814 and 1815. Treadwell’s last public service to Connecticut came in 1818, when he was elected as a delegate to the convention that drafted a new constitution for the state.

John Treadwell died on August 19, 1823 in Farmington, at the age of 78. His obituary in the Connecticut Courant said of him, “We believe ‘tis no disparagement to others to say that no man’s opinion was as often consulted or equally influential with his, on the great and important subject of Christianity. He will be long remembered for his eminent piety. Strict in the discharge of moral and religious duties, yet free from bigotry, though he was always tenacious of principle, he has descended to the tomb, lamented by the intelligent and virtuous.” 5

His wife Dorothy passed away in 1829 at the age of 84. She is buried next to her husband in the Old Farmington Cemetery.

Morgan, Forrest, ed. Connecticut as a Colony and as a State, or, One of the Original Thirteen.  Hartford: The Publishing Society of Connecticut, 1904 [CSL call number F 94 .M84].