1st Governor of the Colony of Connecticut 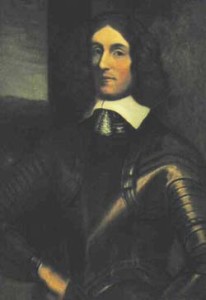 John Haynes was born May 1, 1594, the son of John and Mary (Michel) Haynes of Great Hadham and Codicote, Hartford and Old Holt, Messing, Essex, England. A Puritan and a man of wealth in England, he married Mary Thornton, daughter of Robert and Ann (Smith) Thornton. They had six children. Mary died after 1624. Leaving his properties and children in the care of others, in July, 1633 he sailed on the ship Griffin with Thomas Hooker and Cotton Mather, arriving in Massachusetts Bay on September 3. He settled at Newtown, Massachusetts and later sent for his children. In Newtown, he married by 1636 Mabel Harlakenden, with whom he had five more children.

He was elected as an Assistant to the General Court of the Massachusetts Bay Colony in 1634, and in 1635 was chosen governor. Increased immigration during 1635 placed a serious strain on the Massachusetts Bay Colony food supply, and some religious and political differences had arisen among the colonists. These conditions caused him to support Thomas Hooker’s plan to lead a group of settlers to Connecticut in 1636. Governors were only allowed to serve terms of one year at that time, so in 1636 he was again an Assistant to the Massachusetts Bay Colony. He last attended court on March 7, 1636/7 and apparently soon thereafter took his family to join Thomas Hooker’s group in Hartford. He quickly became active in the government of the Colony of Connecticut. During the Pequot War (1636-1638), Haynes was sent with Roger Ludlow to the Massachusetts Bay Colony to explore the possibility of an alliance between the two colonies in fighting the Indians. He was against the killing of Pequot women and children, a liberal stance for the time. He helped negotiate and was a signer of the 1638 treaty between the Narragansett’s, Mohegans, and the Colony of Connecticut.

Formal government of the Colony of Connecticut was instituted with the adoption of the Fundamental Orders on January 14, 1638/9. The Fundamental Orders consisted of a preamble declaring the towns of Windsor, Hartford, and Wethersfield associated and conjoined “to be as one Public State or Commonwealth” and eleven “orders” for governing the Colony including the provision for a General Court with “the supreme power of the Commonwealth” and the election of magistrates and other public officers. Haynes’ service as governor of the Massachusetts Bay Colony no doubt influenced the Colony of Connecticut to elect him as its first governor on April 11, 1639. Connecticut, like the Bay Colony, only elected a governor for a term of one year, and did not allow him to serve a second term in succession. John Haynes was so popular with the colonists that he served alternately as governor and often as deputy governor from 1639 to his death in 1653. Haynes had been known as a strict ruler in Massachusetts and helped expel Roger Williams from that colony. However, he became more tolerant in Connecticut and was friendly towards Williams, who had gone to Rhode Island.

John Haynes and others had begun working for an alliance of the New England colonies as early as 1637, and in 1643 their work resulted in the formation of the New England Confederation, whose purpose was to protect the colonies from Indian attacks and from settlement and attacks by non-English settlers. At the same time, as a loyal English subject, he supported English settlers who tried to encroach onto Dutch territory.

Disputes between Native American tribes and between Native Americans and Europeans took up much of John Haynes’ time during his eight terms as governor. In addition, he helped prosecute citizens of the Colony of Connecticut that were accused of witchcraft. He and two other magistrates found a Goody (“goodwife” or “Mrs.”) Bassett of Stratford guilty of witchcraft in 1651.

John Haynes returned to England in 1647 to sell his estate there, which was then worth about 8,000 pounds in English money. Six years later, on his death, his estate was worth only 1,500 pounds, as Haynes had willingly used his own funds to help Connecticut become an independent colony.

John Haynes died in Hartford, Connecticut early in January of 1653, at the age of 58. He is buried in Hartford’s Ancient Burying Ground and his name appears on the Founders Monument. A statue was placed on the north facade of Connecticut’s State Capitol building in his honor. Haynes Street in Hartford is named after him.

Portrait
Harold A. Green painted this portrait in 1934 from a likeness found in a home in Rhode Island. Although once thought to represent John Haynes, it is more likely a portrait of his son, Hezekiah, who served with Cromwell and would more likely to have been shown wearing armor. The portrait is 32″ x 41″ in its frame.