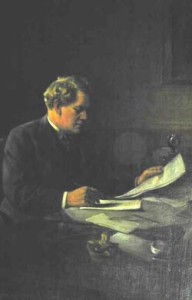 It is somewhat unusual that Everett Lake was Connecticut’s lieutenant governor twelve years before he became governor. The Republicans, who seemed invincible during this era, broke into factions that allowed the Democrats to win in 1910, and likely delayed Lake’s efforts to gain higher office.

Everett John Lake was born February 8, 1871, in Woodstock, Connecticut, to Thomas A. and Martha (Cockings) Lake.  Lake’s father was a Union veteran of the Civil War and former state legislator who had business interests in Connecticut, Rhode Island, Massachusetts and Nebraska. As a child, Lake attended schools in Woodstock, but in 1885, his family moved to Stromberg, Nebraska, where he graduated high school. When the family moved back East to Rockville, Connecticut, in 1887, Lake entered Worcester Polytechnic Institute in Worcester, Massachusetts.

It was while attending Worcester Polytechnic Institute, that Lake discovered football. He had a natural talent for the game, and he became the team captain in 1889.  Practice was limited to one session a week at Worcester, so Lake often spent his afternoons scrimmaging with the Harvard football team. After he received a Bachelor of Science degree from Worcester Polytechnic Institute in 1890, he went on to attend Harvard to finish his education, and to play football. The 1890 Harvard football season was undefeated, thanks in part to Lake, and the 1891 and 1892 seasons were also successful. The newspapers at the time heralded him as “one of the greatest line breakers of all time,”1 and he was chosen for three All-American teams.

Lake graduated from Harvard in 1892. The next year, he went to work at the Hartford Lumber Company, which his father owned. By 1901, he was made its president, and he served as head of the company until his retirement in 1938. He also served as either a director or officer of other area companies and banks.

Lake was married three times. On September 4, 1895, he married Eva Louise Sykes, the daughter of George and Sarah (Fitton) Sykes, of Rockville. They had two children, Harold and Marjorie. After forty years of marriage, Eva passed away on November 25, 1935, in Boston, Massachusetts. Her body was brought back to Connecticut for burial in Cedar Hill Cemetery in Hartford. After Eva’s death, Lake married Mrs. Elizabeth (Keeney) Gordon, the widow of Lewis E. Gordon, on Christmas Eve, 1935. After a long illness, she passed away on August 28, 1936, in Whitefield, New Hampshire. Elizabeth is also buried in the Cedar Hill Cemetery. In 1940, Lake married Barbara Lincoln, a prominent business woman and director of the Sage-Allen store in Hartford. Surviving him by twenty years, Barbara died June 16, 1968, and is buried beside Lake in Ashford.

Lake was active in the Republican Party. In 1902, he was elected to the General Assembly as a Representative from Hartford. Two years later, he was elected to the Senate.  In 1907, he became Lieutenant Governor under Rollin S. Woodruff, and he expected to become a candidate for governor at the 1908 Republican State Convention. The nomination went to George Lilley instead. Two years later Lake appeared to have sufficient votes to win his party’s nomination for governor, but a split within the Republicans led them to choose Charles Goodwin as candidate. Lake abandoned politics for ten years, but at the 1920 state convention he supported the nomination of William H. Hall, a close friend. When the delegates became deadlocked over whom to select for governor, Lake was nominated. Not only did he win his party’s support, but he also received more votes at the polls than any gubernatorial candidate had ever obtained before, defeating Democratic candidate Rollin U. Tyler by 110,880 votes.

During this time, the Republican Party dominated Connecticut politics, and the Party Chairman, J. Henry Roraback, dominated the Republicans. Because Lake viewed his huge victory as one that did not depend on Roraback, he chose to be somewhat independent in his role as governor. In doing so he doomed any hopes he might have had at another nomination for the office.

Lake attempted to operate a government that was open to the public, particularly when it came to showing how the state spent its money. He personally visited state facilities and made budget cuts for some of them. An eight-hour work day was also established for children.

When Lake left office he continued to work with the Hartford Lumber Company as well as participate in many civic and private organizations. His interest in football did not diminish and he continued to attend Yale-Harvard games. Governor Lake died September 16, 1948, at Hartford Hospital. Then current governor James C. Shannon said of Lake: “Outstanding as a private citizen, he brought vigor and enterprise to the office of Governor. Our memory of Governor Lake as an outstanding member of our state community and as a public servant is now part of the splendid tradition of Connecticut.” 2  Lake is buried in the Westford Hill cemetery in Ashford.