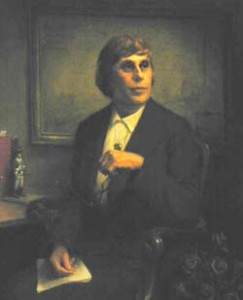 The election of Ella Grasso in 1974 gave Connecticut its first female governor and its first governor of Italian heritage. Her election also gave the nation the first woman of any state to be elected governor in her own right, without having run on the record of a husband who had also been governor.

Born Ella Giovanna Oliva Tambussi, her parents James and Maria (Oliva) Tambussi were Italian immigrants who valued education highly and made it possible for her to attend private schools. She attended St. Mary’s School, Windsor Locks, and the Chaffee School in Windsor and won a scholarship to Mount Holyoke College, where she received a B.A. in 1940 and an M.A. in economics and sociology in 1942. Convinced by her educational experiences that she should enter public service, Grasso served with Connecticut’s War Manpower Commission during World War II. In 1942, she married Thomas Grasso. The couple had two children, Susanne and James.

Grasso’s work for the Connecticut Democratic Party began in 1943. She was elected to Connecticut’s House of Representatives from her hometown of Windsor Locks in 1952 and reelected in 1954, serving until 1957. Two years later she became Connecticut’s Secretary of the State, holding that post for 12 years, longer than any Secretary of the State since 1835. In 1970, Grasso ran for the 6th Congressional District seat vacated by Republican Thomas Meskill, who was running for governor. She defeated Republican candidate Richard Kilborn in that election and was reelected in 1972. She served on the House Veterans’ Affairs Committee and House Education and Labor Committee.

Accustomed to considerable influence in her home state, Grasso was frustrated with a system in Washington that left new legislators virtually powerless and by 1974 was receptive to the idea of challenging Meskill in the gubernatorial race. Her major opponent within the Democratic Party was Robert Killian of Hartford, the State Attorney General, but Grasso’s victory over Killian by a nearly 2,000-vote margin in the Hartford primary boosted her candidacy. Although her relationship with Killian was an uneasy one, as a unifying measure Grasso agreed to Democratic Party Chairman John Bailey’s compromise plan to place Killian on the ticket as her running mate. Future governor William A. O’Neill served as her campaign manager. The Republicans nominated U.S. Representative Robert Steele, Jr. to oppose Grasso, but she won by 203,321 votes. Her victory in the November elections not only was part of a complete sweep of the state office by the Democrats, but they also gained control of the General Assembly as well.

Ella Grasso took office in January of 1975 and almost immediately acquired the image of a “tough customer”. Her records as governor demonstrate a hands-on approach to the administration of her office. She was a workaholic and expected her staff to perform with the same dedication and intensity; sometimes she would call the staff early in the morning to get them to the Capitol immediately for a meeting.

She initially faced problems similar to those that confronted Governor Meskill when he took office four years earlier. She inherited a seventy million dollar debt from the outgoing Meskill administration, forcing her to make some austere and unpopular moves. Without funding to carry out the social programs she had promised in her campaign, she chose to move slowly and offered only a few legislative programs during her first year in office. Legislation was passed to help consumers, and the Freedom of Information Act for Connecticut became law. The sales tax was raised to seven percent. Still the budget deficit grew, but, following the guidelines of Democratic Party Chairman John Bailey, she continued to oppose implementation of a state income tax. Grasso called a special session of the legislature in December 1975 and proposed tapping into the Veterans’ Fund and requiring state employees to work more hours for the same pay. When the General Assembly refused to cooperate with her proposals, Grasso laid off 505 state employees just before Christmas. Her public image plummeted.

In 1976, Connecticut began its State Lottery. This, along with increases in the state’s gasoline tax, an improved economy, and judicious use of state funds, finally gave Connecticut a budget surplus. As a result, most of the fired state employees were rehired. Ella Grasso still suffered from a negative image, but her ability to balance the budget, combined with increased aid to cities and towns and the reduction of some business taxes, improved public perceptions of her.

On the national political scene, Grasso’s name was mentioned as a possible candidate for President or Vice President in the 1976 election. An early supporter of Henry “Scoop” Jackson, she saved herself considerable political embarrassment by switching her support to Jimmy Carter in June 1976. Grasso co-chaired the Democratic National Convention that July. Rumors circulated that Carter would name Grasso to his cabinet or as Ambassador to Italy, but Grasso had already announced her intention to run for another term as governor.

In February of 1978, a blizzard hit Connecticut and paralyzed the state for days. Grasso went to the State Armory and took a personal interest in operations to help the citizens of Connecticut recover, and her popularity soared. The public now believed that it had not just a politician but a pro-active, caring, compassionate woman as governor. At the same time Grasso attempted to minimize Lieutenant Governor Robert Killian’s political stock by not assigning him a substantive role during the crisis. That summer the Democrats nominated William A. O’Neill as their candidate for Lieutenant Governor on the ticket with Ella Grasso. Grasso’s new image as “Mother Ella” helped her easily win reelection in 1978, defeating Republican challenger Ronald Sarasin by 190,793 votes. This huge victory was a testament to both her political shrewdness and her now immense appeal.

Grasso was in complete command at the beginning of her second term. Loyal Democrats controlled both houses. The large surplus continued, and she was able to increase social spending in some of the areas previously promised. Grasso’s Urban Action Program directed funds to the needs of impoverished areas in the state, with money aimed at housing, mass transit, day care, and the elderly. However, the late 1970s were marked by an oil crisis that hurt the state’s economy and required state aid for heating for the poor in the winter. This, and the increased operational costs of state government, forced Grasso to call for a tax increase for the first time in several years. Gasoline shortages in the summer of 1979 also tested her leadership abilities. A manageable system of odd/even rationing based on license plate number was instituted to ease hoarding and long lines. She opened an emergency gasoline center at the State Armory.

At the national level, Grasso was one of the first governors called to Camp David to discuss energy issues and was mentioned as a potential running mate in Carter’s 1980 reelection campaign. But Connecticut’s economic condition and Grasso’s personal health both took a turn for the worse in 1980. Rising energy costs and increased unemployment contributed to a 128 million dollar revenue gap. Grasso had no choice but to call for an increase in the sales tax to seven and one half percent, one of the highest in the nation, as well as for increases in other taxes. In March she was diagnosed with cancer, and her condition worsened as the year progressed. Aware that her cancer was spreading, concerned about her service to the people of Connecticut, and feeling she was not able to function as governor in the way the people of Connecticut deserved, Grasso announced in early December that she would be resigning from office. Her resignation took effect on December 31, 1980, and Lieutenant Governor William A. O’Neill was immediately sworn in to replace her. Joseph Fauliso, President Pro Tempore of the Senate, took the oath as Lieutenant Governor.

Ella Grasso died at Hartford Hospital on February 5, 1981. Her body lay in state in the State Capitol for 24 hours, where she was mourned by the public and politicians of both parties. She was buried at St. Mary’s Cemetery in Windsor Locks.

The people of Connecticut have honored Governor Grasso’s contributions to the state in a number of ways. Streets in several Connecticut communities were named for her, including Ella Grasso Highway (Route 75) in Windsor Locks. State facilities in Groton and Stratford are named for her. Grasso received one of the highest honors that the State of Connecticut could bestow when a privately funded statue of her was placed in a niche above the south portico of the Capitol building. Only statues of Connecticut’s most illustrious leaders are in the niches, and the statue of Ella Grasso was the first of a woman to be so placed.

Ella Tambussi Grasso’s birthplace in Windsor Locks still stands, along with two houses she owned there. All are in private hands.

Other Institutions with Relevant Collections