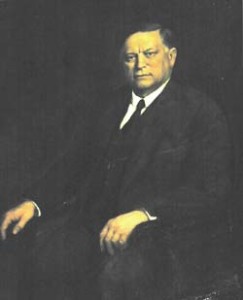 A newspaper article compared the life of Charles Augustus Templeton to an Horatio Alger story.1 He was born on a farm in Sharon, Connecticut, to Theodore and Ella (Middlebrooks) Templeton. As a young child, his parents moved to Winsted, where his father, a Union veteran of the Civil War, found work at the Gilbert Clock Company. Charles had some schooling, but he preferred work over education. He got his first job at the age of eight as an errand boy earning 25 cents a day. Despite his humble beginnings, through hard work and perseverance Charles A. Templeton rose to hold Connecticut’s top state office.

As a young man, Templeton worked at several jobs, including machinist at the Seth Thomas Clock Company in Thomaston, janitor at a high school and a church, grocery store clerk, and assistant postmaster of Plymouth. He once considered becoming an Episcopal priest, but in 1888, while on a visit to Waterbury, Templeton answered an advertisement for a bookkeeper in a hardware store. When asked if he had experience keeping books, Templeton replied in the negative, but added that “he could do any task that anyone else could.”2 He was hired and worked there for the next several years. He eventually bought the business with a partner, but later left to open his own hardware business in the city under the name of Charles A. Templeton, Inc.

On June 17, 1897, Templeton married Martha A. Castle, the daughter of John and Amelia (Parsons) Castle. They had three daughters: Katherine, Nancy and Lucy. All three daughters married and together, gave the Templetons eight grandchildren.

Templeton was an active Republican who served on Waterbury’s Board of Aldermen before being elected to the State Senate in 1919. In 1921, he became Lieutenant Governor under Everett J. Lake. During this time, the Republican Party dominated Connecticut politics, and the Party Chairman, J. Henry Roraback, dominated the Republicans. Neither Governor Lake nor Lieutenant Governor Templeton was a favorite of Roraback. Lake had refused to work closely with him during his governorship and as a result was limited to one term.

Templeton sought his party’s nomination for Governor at the Republican state convention in 1922, and because of opposition from other Republican leaders, Roraback was forced to accept him as the candidate. Roraback made two conditions as his compromise for accepting Templeton. One was that he could only serve one term as Governor and the second was that political newcomer, Hiram Bingham, would be the candidate for Lieutenant Governor. Templeton won the election, defeating Democratic candidate David E. Fitzgerald by 21,590 votes.

Once Templeton took office, he also refused to work closely with Roraback, angering him much as had Governor Lake. Templeton turned down Roraback’s choice of Raymond E. Baldwin, a future Governor, to be his personal secretary, and instead chose Anson McCook. Templeton also refused to nominate Roraback’s choice of John A. MacDonald for the position of State Highway Commissioner. Templeton favored a three-man commission for the position. However, Roraback had the overwhelming support of the Republican-dominated General Assembly, and MacDonald was appointed with the advice and consent of the Senate. MacDonald would later become involved in the Merritt Parkway project. In retaliation for showing such independence, the General Assembly failed to confirm Templeton’s nomination of Judge Frederick M. Peasley to the Connecticut Superior Court. Templeton also had his successes. One was an effort to prevent “eclectic” physicians, holding only mail-order medical licenses, from practicing in the state. Another was his work in support of state charities.

When he left office, Templeton worked at his hardware business until he retired in 1947. The following year, on June 17, 1948, Templeton and his wife Martha celebrated their golden wedding anniversary. He remained active in numerous local civic and charitable causes, particularly raising funds for the YMCA and churches. On August 15, 1955, Templeton passed away. His obituary in the Waterbury Republican printed his philosophy on life: “I always felt the world owed me nothing except what I could acquire through my own efforts. I believe all of us get out of politics, business or religion just about what we put in. I believe success in life is gained largely by doing the day’s work, little or big, as it comes along, promptly and efficiently.”

Templeton is buried at the Riverside Cemetery in Waterbury. His wife Martha passed away in March of 1965. Three of the Templeton houses are still standing in Waterbury, all of which are privately owned.